The unprecedented popularity of mixed martial arts in Russia and the CIS is directly related to the outstanding athletes from this sport. At the sight of the abbreviation MMA (Mixed Martial Arts), only two names come to mind: Fedor Emelianenko and Khabib Nurmagomedov. About the Russian icon MMA Fedor you all know firsthand. This is a true hero and pioneer for Russian sports, who was noticed not only in the former USSR but also abroad, in particular – in the country of MMA – the USA. Conventionally, Fedor was and remains a sort of Gagarin in the world of Russian mixed martial arts. But the direct successor, who took over the baton to popularize the sport, can without a twinge of conscience call the Dagestan MMA fighter – Habib Nurmagomedov, nicknamed “Eagle”. He is recognized not only in Russia but also in America, which is already proof of his high status and professionalism. Today we will collect all the information about this Dagestan phenomenon, which will soon bring the first MMA world champion belt to the UFC league to Russia in the near future.

On Habib equals all: athletes, amateurs, young people, and even the older generation. There are really many reasons for this:

This is only a small list of its merits, but we are interested in a little different: its sporting condition, form, and strength indicators. Now he is a megastar and a real phenomenon from Dagestan, which proved to everyone that hard work, the Soviet school of sambo, judo, and wrestling easily compete with foreign grepling or Brazilian jiu-jitsu. But the path to glory was not easy. This is long-term work in the gym, hard training, and daily training, and that’s just what we’ll talk about.

Habib’s training, his training, weight training, and other professional qualities interest not only athletes but also ordinary MMA spectators. Thanks to numerous interviews and training video recordings, we can provide you with this information. In addition, we contacted the people responsible for his training, and they told us some interesting insights regarding the Habib training process. But first things first.

A little bit about Khabib Nurmagomedov

“Eagle” is currently the only contender for the title of lightweight champion with a brilliant winning streak of 24. That is, he successfully completed 24 fights and did not suffer a single defeat, which again has a positive effect on his status and popularity. 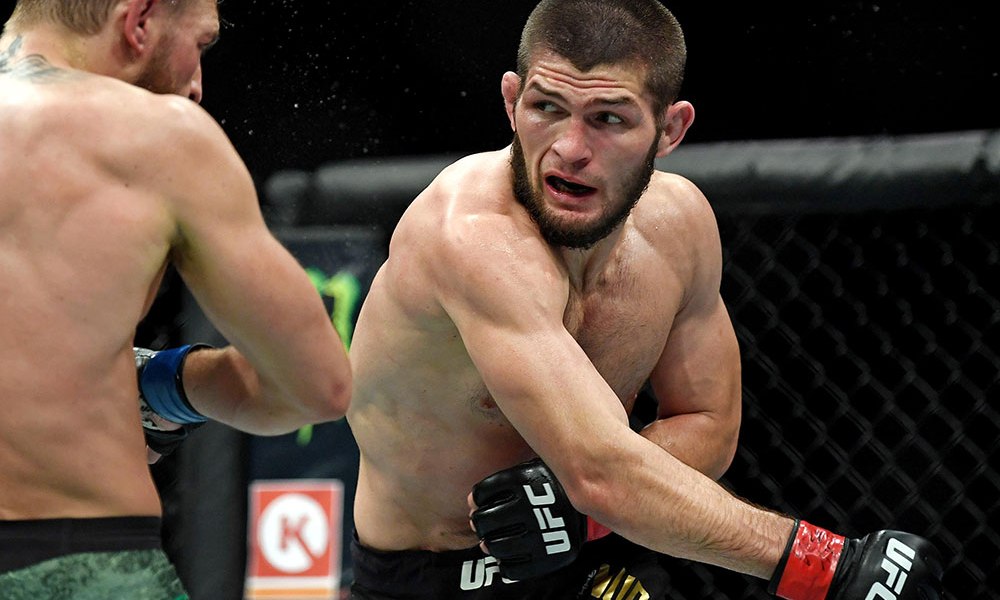 He was born and grew up in Makhachkala, where, under the guidance of his father, he actively practiced from an early age. It is noteworthy that not so long ago a video appeared in the network, where Habib’s game training with a real bear was captured. A kind of duel took place according to the rules of the fight, where Habib at the age of 12-13 years fights with a clubfoot, and at the same time copes well with the task. As the athlete himself later said, he grew up with this animal since childhood, and there was no aggressive connotation in the video, rather wrestling foolishness. The video quickly spread online, thanks in large part to UFC commentator Joe Rogan, who discussed this video in his podcast. Habib’s popularity grew significantly during that period, and Russian athletes and wrestlers again began to think a little stereotypically.

Habib is a classic wrestler who has mastered striking techniques and combat sambo skills quite well. He successfully combines the fight with a strike, exhausting opponents and inflicting average damage to them in order to weaken their actions in the stalls. Typical gameplay is to exhaust an opponent, try to knock him out, and then make a roll on the canvas and successfully force him to surrender to any available technique, of which there is a lot of Habib to account.

24 wins in a row did not appear just like that. In lightweight (66-70 kg), Habib has phenomenal physical training, which, with its dimensions, makes it easy to throw opponents to the floor and to conduct various pain or choking techniques. The wrestling school on the territory of the former USSR is very strong, which cannot be said about America and Brazil, where most of Habib’s rivals were born.

For the entire division, Habib is the most dangerous rival, because he easily takes the fight to the ground, and this is his element. Therefore, many try to avoid a fight with him. This explains how with such a length of the winning series, he received the title only recently, while 2-3 fights are enough for ordinary fighters. There is no political implication here because the UFC Russian champion is even profitable because it attracts a huge new market of spectators and fans.

On November 21, 2012, Habib made his first appearance in the UFC league. It was his 17th professional fight in mixed martial arts. He won that fight, and did it in the next 7, bringing the winning streak to 24 victories in a row. 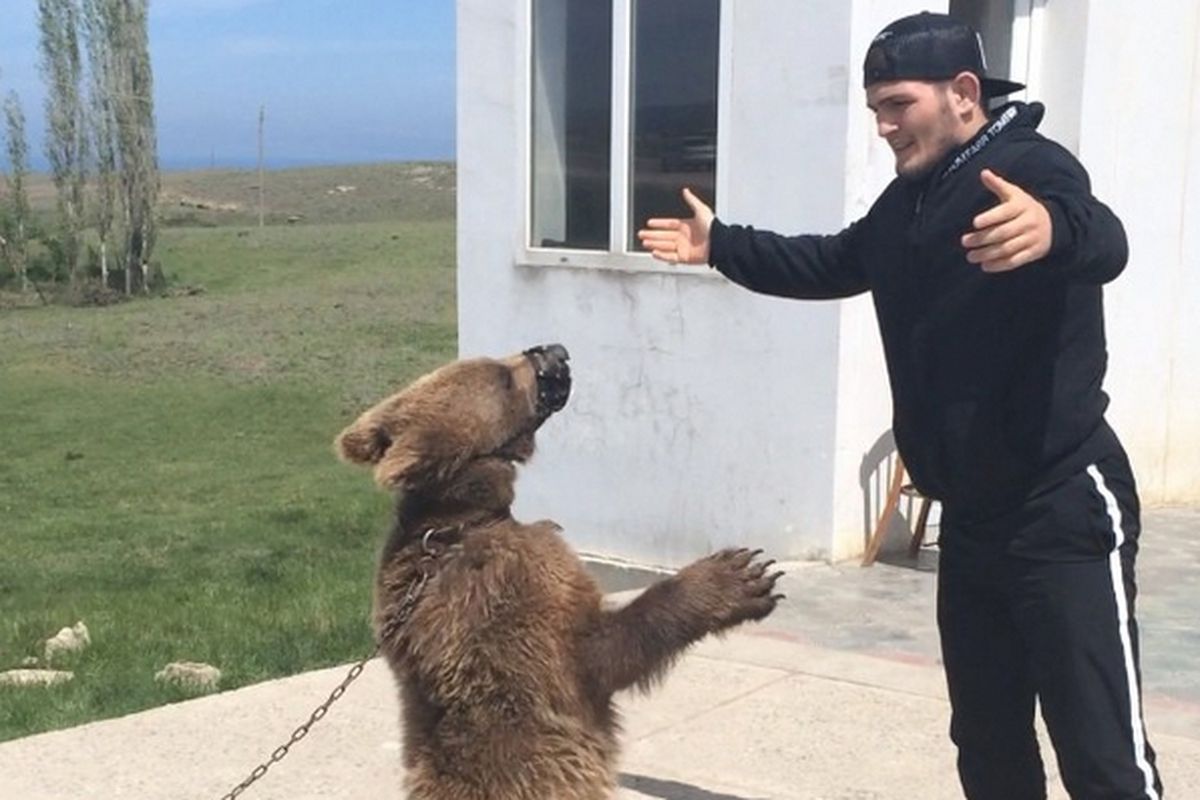 His closest fight against the promising and long-established as a good drummer Edson Barbosa. Habib is confident that victory will once again make him the main contender for the UFC title, and the management will give him one more chance.

Habib is an adherent of balance. In his arsenal, there are strength training, cardio, light Crossfit training, work with weights, and much more. The focus is on the development of general endurance, and this is achieved through running. The most ordinary run is the best exercise according to many professional fighters. Habib Nurmagomedov thinks the same way. Running is an integral part of any training because it is a tool for improving endurance, training the nervous system if we are talking about long runs, and of course, a great waste of calories, which is important for reducing weight before a fight.

It is important to note that Habib coached his excellent endurance, not one, and not two years, but practically all his life from an early age. He often made big races in mountain conditions. The air there is cleaner, but at the same timeless oxygen-saturated, as a result, running in the mountains rather quickly tires and causes a burning sensation in the legs (accumulation of lactic acid). At the same time, frequent training of this type train the muscles, respiratory and cardiovascular systems in the best possible way, because due to such an aggressive external environment, the body has no choice but to quickly adapt to such conditions.

You need to run either often for a bit, or rarely, but for a long time. This is exactly the advice that Habib gave to newcomers in an interview. He himself does regular runs almost every day. Closer to the performance of the volume of running can double.

He is currently training in America at the American Kickboxing Academy camp, along with interim champion Daniel Cormier and former heavyweight champion Keyn Velasquez. Mentor Javier Mendez always responds well to the wrestling base of Habib, and the level of training of the Russian athlete. However, despite the absence of mountains, Habib continues to run regular runs. Alas, it is impossible to imitate the mountain air, but other life hacks are used: weights on the legs and arms, heavy vests, a lot of clothes, belts for hypoxia, etc. All these measures make the environment aggressive, which forces the body to develop.

Special training masks, which create hypoxia, are popular in the network, and thus supposedly imitate mountain conditions. In them, people do fitness and jogging. In reality, the mask can not create even similar conditions. Therefore, you will never see how Habib trains in such a mask, which resembles half of a military gas mask.

Work with the “iron” is the place to be but in a very dosage format. In contrast to fitness and bodybuilding, the speed and intensity of exercise are dramatically different.

If you are engaged in contact sports, try to train as follows:

For example: in the bench press, you slowly lower the barbell on your chest, and then with one quick movement, squeeze the bar to the top. This should be done as quickly as possible. Such training best meets the requirements of fighters. 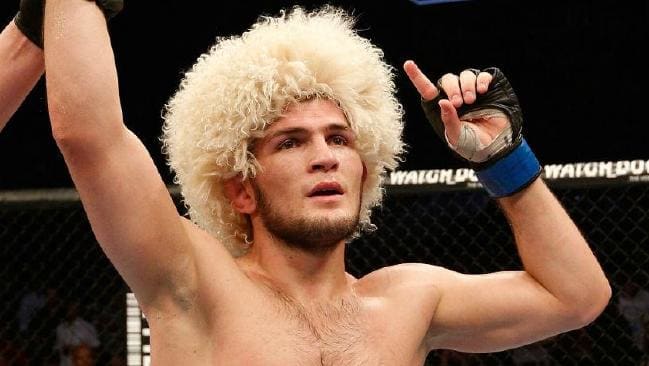 Classic strength training enslaves and makes athletes sluggish. Beats are not as strong and effective. Therefore, they train fast and slow fibers separately in a single repetition. On the contrary, bodybuilders teach fibers to contract together, creating a synergistic strength effect. The fighters, develop strength and speed separately, trying to activate the maximum number of muscle fibers in minimal time.

Habib never trains a press with weights, preferring classical exercises with body weight. Lifting the legs to the crossbar, twisting, and various types of slats. Burdens in his understanding enslave his waist and bind him as a fighter. About this, by the way, Fedor Emelianenko spoke on his masterclasses.

Most of all, Habib does not like the usual exercises from fitness and bodybuilding, because they need to be performed with a special format, and this takes a lot of strength and concentration. In addition, associations with bodybuilders cast boredom on him.

Cardio runs Habib conducts in its format. This is a mixture of classic cardio, sprint, and interval training. As a rule, it is a slow run from 1 to 2 hours, which alternates with 10-minute sprints. Well, in the end, Habib can begin to alternate these types of running. It all depends on the training plan and physical condition.

Habib like no one else knows how to train to failure, overcoming himself and the limits of his body. He always talks in his seminars about the importance of discipline and the need to follow through. “You can not give up, and you can not show fear, neither to himself nor to his rival.” But at the same time, he is not a fan of training through failure, which can harm. He subtly distinguishes the line between laziness and poor health. If you have not recovered, do not need to kill yourself with a new workout. It is better to rest and return to the workout stronger than before. Therefore, one should not overcome oneself in everything.

Habib freely drives 10-15 kg between fights. That is, he goes to fight in the category up to 70kg, but at the same time after the fights in the rest period, his weight can vary from 82 to 85kg, and sometimes even more. As soon as the announcement of a new battle takes place, he sets off on a rigid diet, and follows it to the end, without failures. Due to long-term weight loss, his body does not suffer from such weight loss. Other athletes try to do it in less time to enjoy goodies more, but this leads to problems with a physical condition, and often it turns out to be terrible endurance. 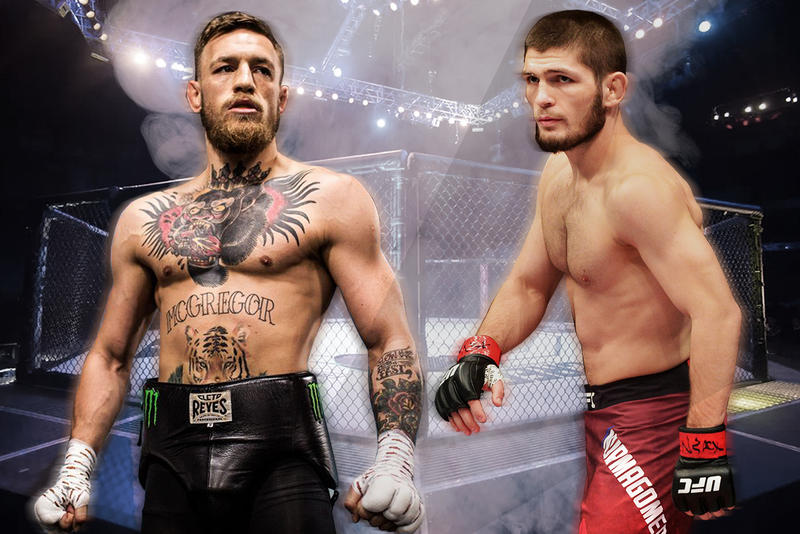 Habib Nurmagomedov is one of the most famous fighters from Russia, especially in the world of mixed martial arts. Now it is recognized even by those who do not follow the MMA and the fights in general. Many people like it because of hard work and perseverance. Everyone wants to be a little better, equal to these idols. Try to practice as Habib, and you will understand how difficult it is to observe the non-stop training regime, especially against the background of a diet.

There are no secrets in his condition, form, and power characteristics. Everything is quite simple – work and patience. Want to be the same hardy? Run more often. Want to fight 5 rounds and not get tired? – run and combine workouts with a fitness center. Want to become as popular in some areas? – again use the advice of Habib: persevere toward the goal and do not listen to anyone.